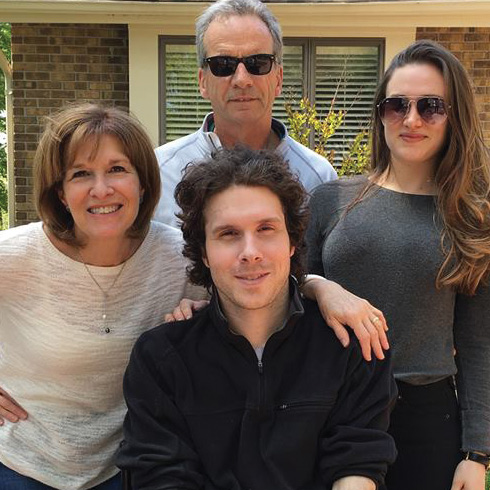 Joe competed in swimming at the age group and high school level. He was an eagle scout and lifeguarded in the summer. On June 12, 2005, right after completing his freshman year at the University of Connecticut he dove into a pool and broke his neck at the C6 level resulting in quadriplegia. He was really excited to be able to return to UCONN one year and three major surgeries after his injury. He has worked extremely hard several hours a day at his physical therapies while pursuing a degree in Chemical and Biological Engineering and a minor in Molecular and Cell Biology as an honors student. This past spring, Joe orchestrated the first annual fundraiser at UCONN for Swim With Mike. He worked with the Honors Council for a year on the project and was able to “make it happen” when they combined the efforts of both the Honors Council and the Student Athletic Advisory Group (SAAC) at UCONN. The fundraiser was a combination “Swim-a-Thon” and “Water Volleyball Tournament”, held on the same weekend as the USC event!  This inaugural event was a success with over 150 people in attendance and over $3,000 raised for the Swim With Mike. Attending were many Honors students, UCONN varsity athletes, some faculty, and lots of caring students.  With this experience, Joe hopes to add many more faculty members and local businesses next year to the list of attendees and contributors. For Joe, the work of many months of weekly meetings and talks to various groups, athletic teams, and potential sponsors was rewarded with being able to actually give something back to “Swim With Mike”, and at the same time meeting so many new friends who joined together for this great cause.