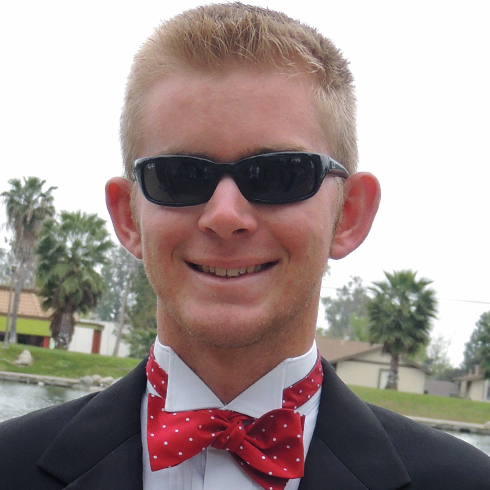 Jake lost his left eye at 10 months of age to a rare form of cancer of the retina called retinoblastoma. His right eye was preserved through chemotherapy and radiation even though the cancer returned eight times. Jake developed a love of sports playing soccer, football, baseball, golf, water polo and basketball. He also plays guitar, surfs and skydives. At the age of twelve he selected golf and football to be his primary sports. Soon after, the doctors told Jake that his remaining right eye would need to be removed and he would be totally blind. Jake had developed a love for USC and its football team in particular. He let it be known that he wanted to see one last USC football game before he lost his sight and his wish came true. After going blind, Jake’s relationship with USC football grew. Jake relearned to play football as a long snapper, and golf. He went on to play both at Orange Lutheran High. He became the starting long snapper his Junior and Senior year. He developed greater ambitions to play at USC where he enrolled after he received a Swim With Mike scholarship. Jake’s twin sister Emma also enrolled at USC and is serving as a member of the Swim With Mike student staff.