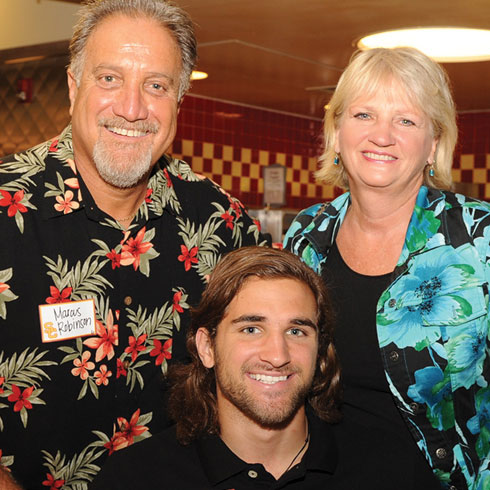 Jake, played on the Fallbrook High School basketball, rugby, volleyball and football team and was selected to the Homecoming Court his senior year. He also enjoyed surfing, snowboarding and riding his dirt bike. He has been actively involved in mission trips through his church and in the summer of 2008 traveled to Africa to volunteer his time at the Tumaini Children’s Home. On September 23, 2008, 10 minutes after leaving football practice Jake was on his way home when he lost control of his car which swerved across the road and hit a telephone pole at 50 miles per hour. He fractured vertebrae in three places resulting in T-9 paraplegia. Jake graduated from Fallbrook High School with his class in the Spring of 2009 with a 3.78 GPA and is majoring in Biology at UC San Diego. He plays adapted sports and is excited to be a part of the Swim With Mike UC San Diego organizing committee. Jake spent the fall 2012 semester at Sea traveling to many nations while completing a full academic course load.