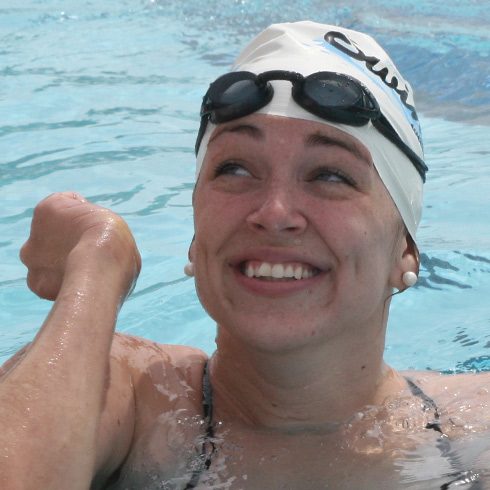 Always an active child, Elizabeth did gymnastics and played soccer, softball, and basketball. Her best sport was volleyball until one day, at the age of 14 she was in a car accident which left her a C 6-7 quadriplegic. While rehabilitating during water therapy Elizabeth developed an affinity for swimming. She joined her high school swim team and went on to participate in the Paralympic Nationals. An outstanding student she graduated from High School as Valedictorian and went on to Harvard College where she participated on the Swim Team. In 2004 she made the U.S. Paralympic Swim Team and won one gold, two silvers and a bronze medal at the Para Pan American Games in Rio De Janeiro, Brazil. She qualified for the 2004 Paralympics in Athens, Greece but did not attend as it interfered with her freshman year studies at Harvard. In June of 2008, Elizabeth graduated from Harvard with a degree in Health Care Policy. After making the team in April she went on to compete for the USA in the Paralympics in Bejing where she placed 5th and 8th in her two events. Elizabeth is excited to attend Stanford Law School and plans to work with Molly Fausone on further developing Swim With Mike—Stanford.