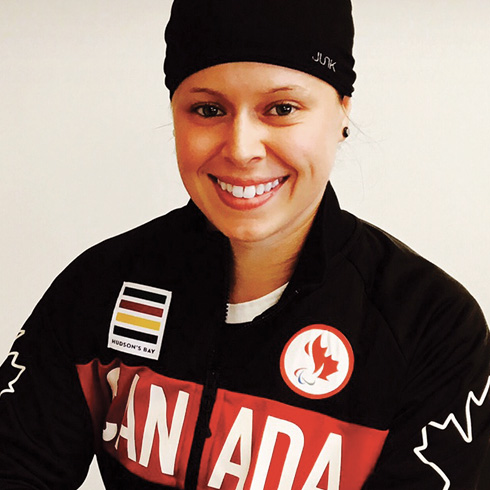 Cindy was born in a little farm town close to Quebec City in Canada where French is the only language spoken. The family struggled financially but Cindy’s mom took her to the library every weekend and encouraged her fascination with learning. The family later moved to Quebec City where Cindy trained for the Alpine Skiing National Team with the dream of making the Canadian Olympic Team. In March 2001, Cindy was diagnosed with Ewing Sarcoma, a bone cancer with a low rate of survival. Twenty-eight chemotherapy treatments, followed by invasive surgery, followed by two years of bed rest, gave Cindy time to complete her high school studies and study medical textbooks in-between rehabilitation sessions. With her cancer in remission, she re-engaged in sports, excelling in wheelchair basketball where she made the 2008, 2012 and 2016 Paralympics teams. Cindy received a scholarship to attend the University of Alabama where she earned her bachelor’s and master’s degrees while playing wheelchair basketball. After completing her doctorate in Biomedical Engineering from USC, Cindy hopes to develop prosthetic limbs and teach at the graduate level.